The story of New Zealand orange roughy:  From the “poster child” of unsustainable fishing to Marine Stewardship Council assessment.

In the late 1970s, a “huge” new fisheries resource was discovered in deep water on the north Chatham Rise. In the early days, there was somewhat of a gold rush mentality for the “orange gold from the deep.” In hindsight, scientists were somewhat slow to realize that orange roughy were very different from the inshore and middle depths species with which they were familiar. However, when scientists did warn that the new species was slow growing, long lived, and nowhere near as productive as first thought, managers were slow to heed their advice. It was not until the mid 1990s that management advice was driven by science.

But then, science had some catching up to do. Trawl surveys were proving problematic in tracking biomass; there were large spawning plumes (much higher than the survey net in places), and the males were “missing” from the trawl survey catches. Acoustic surveys were promising, but large uncertainties in terms of target strength greatly reduced the usefulness of the acoustic biomass indices. Catch Per Unit Effort (CPUE) indices were tried but produced different trends from different areas within the same stock boundaries—often with a huge decline in the first three years from new areas as “resident” fish were caught. Ageing also proved problematic and, without age data to provide information on recruitment patterns, the stock assessment models were not credible.

All the pieces of the puzzle were finally brought together in 2014. A new ageing protocol was available, acoustic biomass indices were informative as orange roughy target strength was known much more accurately, and mistakes of the past were avoided (e.g., CPUE indices were not used). Four credible stock assessments were produced and the three stocks that were found to be in good shape were put forward for MSC certification (see Figure 2).

Orange roughy is a long-lived species, and this has the advantage that when a stock is managed at sensible levels there are many cohorts in the spawning stock biomass. As a consequence, the biomass is stable over several years. With regular monitoring of stock sizes and a robust management strategy for setting TACs, the future of orange roughy now has a “golden glow” of sustainability.

The story of how orange roughy fisheries in New Zealand have moved from an often quoted example of “unsustainable fishing” to being put forward for Marine Stewardship Council certification is a classic fisheries story with a fascinating plot line. The story began more than 30 years ago and for much of that time orange roughy has been a source of frustration and contention for scientists and managers.

Orange roughy has been an important commercial species in New Zealand since large aggregations were first commercially fished on the north Chatham Rise in the winter of 1979. Very little was known about the fish at that time and, as a consequence, serious mistakes were made. It is now well known that this deep-water fish can live to be more than 100 years old and may not spawn until they are 30 years old. This is very different from the inshore and middle depths species that scientists were familiar with in the 1970s and 1980s.

There was little fishing of orange roughy prior to 1978 when New Zealand’s Exclusive Economic Zone was declared. The first orange roughy fishery developed in water deeper than 750 m on the north Chatham Rise in June–July 1979 when spawning aggregations were fished. The first annual catch was about 12,000 t, but in the next decade catches (over the whole Chatham Rise) consistently totaled about 30,000 t. In the early 1980s, a number of other orange roughy fisheries developed, notably a fishery on the Challenger Plateau (ORH7A) and another off the Mid-East Coast (both with peak annual catches of about 10,000 t) (see Figure 1). 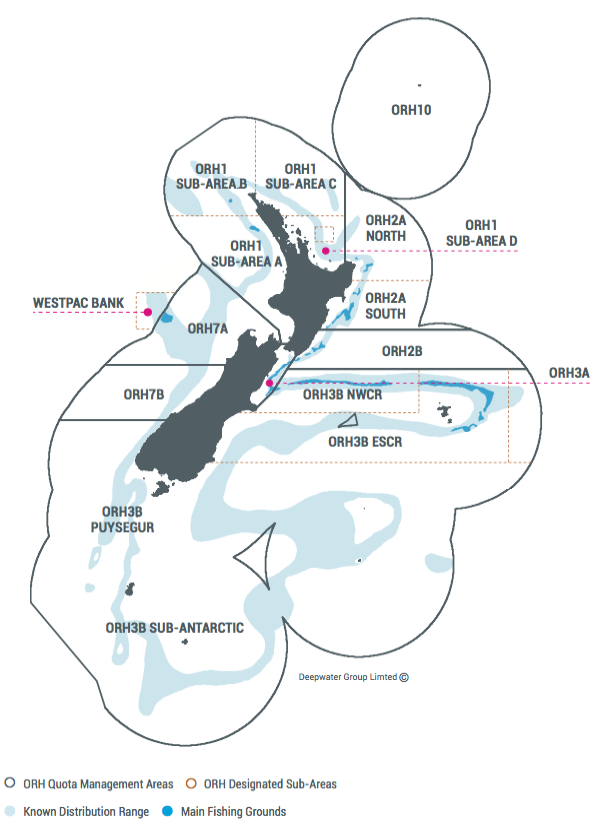 Management started early on the Chatham Rise with a Total Allowable Catch (TAC) of 23,000 t in the 1981–82 fishing year (April to March). The TAC was exceeded in that year by about 5,000 t of reported catch and probably quite a bit more of incidental mortality (i.e., burst trawl nets). TACs in ORH3B, which includes the Chatham Rise, peaked at almost 40,000 t and did not go below 20,000 t until the 1994–95 fishing year (October to September). The TACs in the early 1980s were based on the best scientific advice of the time although the biomass and yield estimates were derived from primitive calculations and assumptions compared to modern stock assessments (Robertson 1985, 1986).

The optimism of orange roughy representing a vast new resource was based on the usual productivity assumptions for inshore and middle depth species. These species were typically thought to have a natural mortality rate of 20–40% (e.g., Francis and Fisher 1979)—meaning they were very productive and could support a high fishing intensity. These (high) rates are associated with fairly fast growing and early maturing species, and not long-lived species like orange roughy. However, because of the great depth and low temperature at which orange roughy were found, early stock assessments and yield estimates were generally based on the assumption of natural mortality of 10% per year (Robertson 1985, 1986). But, there were also explorations involving 20% and 30%. In particular, an unfortunate experiment of deliberately increased fishing pressure on the Challenger Plateau was based on model simulations using 20% (Robertson 1986).

Stock assessments of orange roughy greatly improved in 1989 when trawl survey estimates were first used as relative biomass indices rather than as absolute biomass estimates (Robertson 1989). Further advances were made through the 1990s in stock assessment with more sophisticated models and more statistically robust use of data. However, scientific advice was not always followed by management, particularly on the Chatham Rise. As early as 1988 there were calls for substantial catch reductions, which were ignored (Robertson and Mace 1988). It was not until the mid 1990s that catch limits on the Chatham Rise, split into a number of “paddocks,” were well aligned with stock assessment recommendations (e.g., see Annala et al. 2000).

While stock assessment models improved, there was a lack of reliable data to use in the models. Trawl surveys on the Chatham Rise were never particularly reliable. This was because the fish were spawning at the time of the surveys; some fish were migrating and there were spawning plumes extending well above the top of the trawl net. Also, the sex ratio started being very skewed with few males being caught (Francis et al. 1995). The use of catch per unit effort indices (CPUE) started being advocated but this held its own dangers. New areas were discovered, particularly on underwater hills, and catch rates would typically start very high and then plummet over the next three years. It was clear to some people that such indices could not be indexing the full stock biomass, but this did not stop such indices being used in stock assessment.

Acoustic surveys of orange roughy had first been conducted in the mid 1980s (Do and Coombs 1989). The technique was seen as promising then and was still promising (but not delivering) more than a decade later. Acoustic surveys were conducted regularly, but the estimates could only be used as relative biomass indices with little prior knowledge of the multiplier required to convert them to absolute biomass. The big problem was trying to get an accurate estimate of the target strength of orange roughy (the proportion of energy that an individual fish reflects). This was not adequately resolved until 2012 with the use of a combined acoustic and optical system that could acoustically “ping” on fish at the same time as photographing them to identify the species (Kloser et al. 2013).

There was one other major obstacle in assessing orange roughy that took many years to overcome. The ageing of orange roughy became controversial when New Zealand and Australian ageing were delivering inconsistent results (Francis 2006). For several years, age data were not used in stock assessment, and deterministic recruitment had to be assumed (taking the recruitment from the stock-recruitment curve rather than estimating it). This was highly problematic as periods of low and high recruitment are often seen in fish stocks. The inability to use age data eventually led to the abandonment of model-based stock assessment for the Chatham Rise (Dunn et al. 2008). It was a return to the dark ages of back-of-the-envelope calculations for “stock assessment” and TAC determination.

Fortunately, the ageing of orange roughy was revisited and a new protocol was developed and tested (Tracey 2009). It took a few years for the new ageing method to be used and for a return to model-based stock assessment, but an attempt was made to assess the Mid-East Coast stock in 2011. This was not entirely successful as the decline in trawl survey indices could not be adequately fitted (Anderson and Dunn 2011). Two alternative models were put forward, but these had contradictory results that management found less than useful (either the stock was in big trouble or it wasn’t).

A successful return to full model-based stock assessment occurred in 2013 when Innovative Solutions Ltd (ISL) was contracted by the Ministry for Primary Industries (MPI) to assess the Mid-East Coast stock (Cordue 2014a). This success led to four orange roughy stocks being assessed by ISL in 2014 in support of Deepwater Group Limited’s application for MSC certification.

The 2014 assessments represented a new approach to orange roughy assessment (Cordue 2014b). The focus was very much on the acoustic surveys as relative, but “informed” biomass indices. Ancillary information, on target strength and the proportion of fish being surveyed, was used to inform the model on the true scale of the spawning population (as seen through the acoustic surveys). The use of catch and effort data to provide biomass indices was stopped. Age frequencies, developed using the new reading protocol, were used in the assessments to provide vital information on recruitment patterns. Maturity was estimated directly in the model using spawning-at-age proportions (ignoring the external estimates from the “transition zone” of the otoliths, Francis and Horn 1997). The threshold for accepting data into the models was raised. Only the most defendable data were used in the assessments.

The 2014 assessments were developed in conjunction with MPI’s Deep Water Fisheries Assessment Working Group (DWFAWG). The DWFAWG has a largely scientific membership, representing most stakeholders, including several research providers. The new assessments were rigorously reviewed and debated (and modified) during a series of DWFAWG meetings from late 2013 through to April 2014.

The acceptance of the four 2014 orange roughy assessments by the DWFAWG and MPI’s subsequent Plenary meeting in May 2014 represented a major milestone in orange roughy research in New Zealand. The successful assessments were made possible because of the decades of investment by the fishing industry in directed scientific research (into orange roughy acoustics in particular).

The four orange roughy assessments were used to develop an operating model for orange roughy so that a robust management strategy could be developed (through the testing of a range of alternatives, Cordue 2014c). The largest uncertainty for orange roughy is the level of annual recruitment that can be expected in the next 20 years when cohorts spawned from relatively low stock sizes reach maturity. The management strategy is designed to deal with this uncertainty. Should recruitment be much less than expected from the current productivity assumptions, then TACs will be reduced and, if stock sizes fall below the target biomass range, then future expectations of productivity and recruitment will also be lowered. 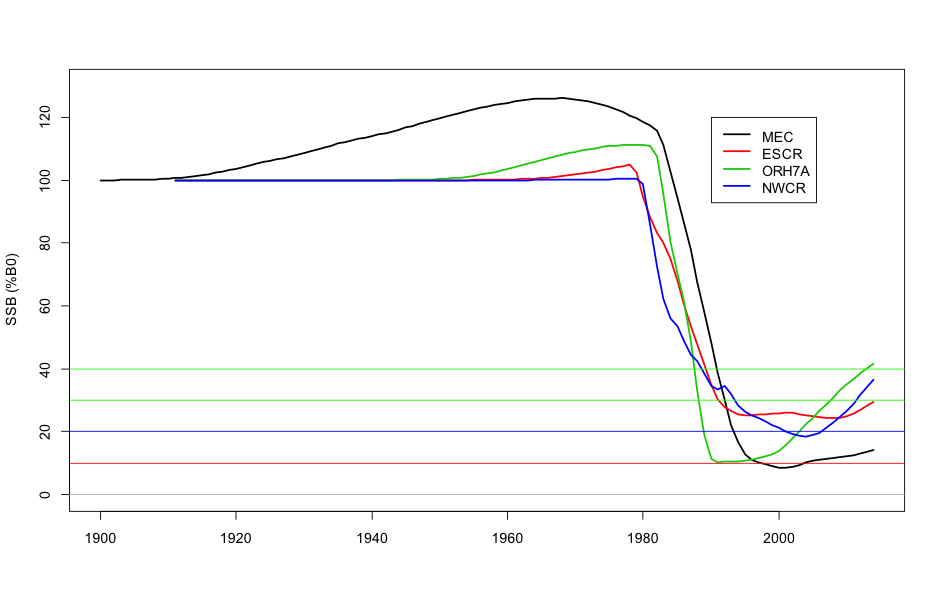 Figure 2: Spawning stock biomass (SSB) trajectories for the four assessed stocks in 2014 (median of marginal posteriors). Stock status is measured as a percentage of the virgin spawning biomass (B0). The target biomass range is 30–50% B0. The three stocks put forward for MSC certification have median estimates of SSB within the target range (ESCR, NWCR, and ORH7A).

P.L. Cordue is a consultant with Innovative Solutions Ltd.